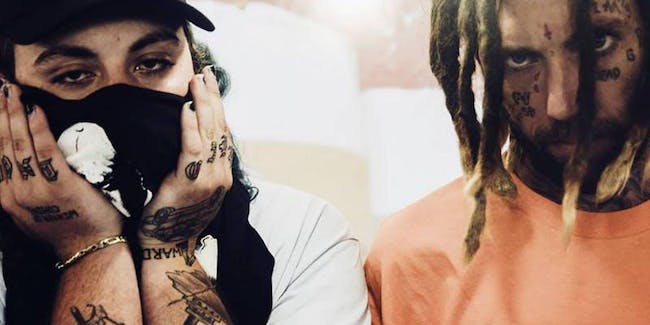 Owners of G*59 Records, producing most of their songs there. See the URLs at the label for more $uicideboy$ related links.

Suicideboys (stylized as $uicideboy$) is an American hip hop duo from New Orleans, Louisiana, founded in 2014 by cousins Ruby da Cherry and $crim (pronounced Scrim). Via the music sharing platform SoundCloud, the duo rose to popularity for their abrasive, self-produced beats, as well as their harsh lyrical content and themes prominently featuring substance use disorder and suicidal ideation.

The duo are considered one of the most popular artists in the underground rap scene, and are also considered to have a cult following. They own and operate their own label, G*59 Records, under which all of their music is signed. After several years of releasing numerous EPs, Suicideboys' debut studio album I Want to Die in New Orleans was released on September 7, 2018. It fared well commercially, debuting at number 9 on the US Billboard 200 with 49,000 units in first week sales.

Enjoy the show from up high and cozy up to seven of your closest friends in one of 30 bottle service Mezzanines.